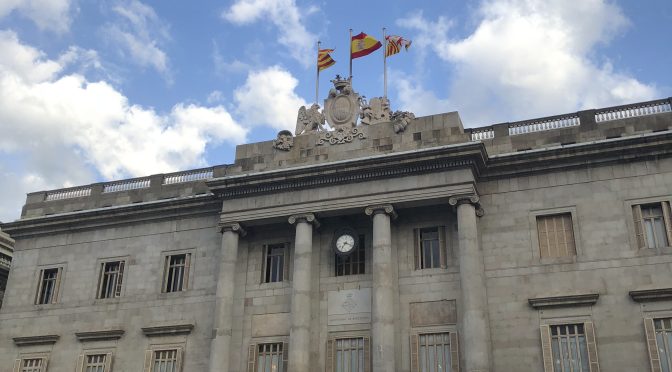 Traveling around Europe is a good shout as you can usually find cheap deals for short breaks. There are so many different city’s and environments to see; if you’re based in the UK like me then you’re lucky we have easy access (for now #ScrewBrexit).

This is my little travel guide to Barcelona. We only went for 4D3N so definitely didn’t experience everything, but this will give you a good summary inshaAllah!

When booking our trip we used lastminute.com – we booked only 2 weeks in advance as we were indecisive! It cost us £370 per person including flights from Gatwick and 3 nights at the 4* Barcelona Universal Hotel. We also paid for the Gatwick Express train from Victoria (anytime return) which was £45.50 for 2 of us.

Top tip #1: If the train you’re on is delayed at any point you can get compensation- our train on the way back was really slow, and I ended up getting a £11.40 refund! Just make sure you take a note of what train you were on.

The flight was fine and everything went smoothly. There is no need to pre-book any transport from BCN to your hotel as theres a handy ‘Aerobus‘ which leaves frequently, and drops you off to various points within the city. From there you can walk or get the metro depending on where your hotel is. It was around €6 euro for that bus, one-way.

Our hotel was very nice and super clean. It had a rooftop pool, rooftop lounge area and the best views! It was also in an excellent location, right next to the Para-lel metro station, and 5 mins from Las Ramblas (a really famous Barcelona street). BTW you have to pay €7.50 hotel tax when checking in to any hotel in BCN.

On the first day we were pretty chilled and just explored with no destination in mind. We went to Las Ramblas & the Gothic quarters which I would highly recommend. We stumbled upon a square called Plaça Reial, which would have been even more beautiful in the day. There was a huge fountain in the middle, while restaurants and shops were on the edge of the square.

Top tip #2: Do not eat ANYWHERE on the centre street of Las Ramblas as the whole place is a tourist trap! You will literally be paying €7 for one can of coke!

There is one shop thats worth visiting on Las Ramblas. Its called Rocambolesc Gelateria and it was the coolest ice cream joint. It was small, but like a willy wonka factory. We got some of their Ice Lollies- one was in the shape of Jamie Lannisters gold hand (it was orange and mango flavoured), and the other was a nose (strawberry and rose flavoured)! Both were tasty and unique.

Overall, things that are a must do are see the Sagrada Familia, go on the Montjuïc cable cars and go wandering around the gothic quarter and the Arco de Triunfo de Barcelona.

I would highly recommend walking everywhere, as you are able to see really cool things that you may not have planned for. We rarely used the metro, and never used a taxi while we were there.

Something that I would say you could give a miss was surprisingly Park Güell, which I thought would be the best but was a lot of effort to get to and wasn’t as fun for us as chilling in the city centre.

Top tip #3: access to the most famous part of Park Güell is ticketed, however, before they open and after they close (different times depending on the season) they have no barriers whatsoever and you can go into the ticketed area! The only downside is low light conditions, but you can still appreciate the beauty.

I have to recommend one random thing we did, which was to go to Grand Hotel Central and visit their rooftop lounge. It was free to get up there, but you had to buy something (we got orange juice). Then we literally chilled by the pool in the sun for a few hours and admired the views! If you need some chill time, I would recommend this.

We experienced no racism or issues of that sort whilst in BCN. I wear hijab so was weary at first, but alhumdulillah nothing negative happened! I think this is because there are a lot of Muslims around BCN, and also because the culture of the people there is to mind their own business. Like they absolutely don’t care about anyone else, and won’t bat an eyelid at you. It’s actually a really good culture apart from when you’re getting pickpocketed and no one cares! My friend nearly had some things stolen from her bag, and as we were shouting at the man, people were just going about their business as if nothing was happening.

Top tip #4: What they say about pickpockets in BCN is so true. Be extremely careful! Don’t keep anything in your back pockets and use bags that zip up. Keep a look out for each others things. Be especially careful in known tourist areas. If someone starts invading your personal space, be alert.

I would only recommend a few places out of the few we tried whilst there.

The first is Wild Beef– a burger joint which serves the most hugeee burgers! It was sooo delicious. I loved their fried chicken options (try the Pollo Loco) and their house chips (they were thin and crispy). They also had their own house sauces which were yum! This was the best meal we had during our trip.

We also went to Xurreria Manuel San Román which served the BEST churros i’ve ever had. I would recommend the large ones filled with dulce de leche over the plain ones. However the plain ones that they serve with chocolate dipping sauce are delicious too.

We were also super lucky in that we found a cute bubble tea place called ZenZoo which served some refreshing bubble tea- perfect for the sunny weather.

We only had a short trip so definitely didn’t get to experience everything. I would have liked to have explored Tibidabo Mountain as theres an an amusement park on the mountain, visited Barcelona football stadium and visited Masjid Tarek Ibn Ziyad. InshaAllah next time!

P.S. if you have any recommendations, drop me a comment!

French toast 😍 from @balanslondon in @westfield