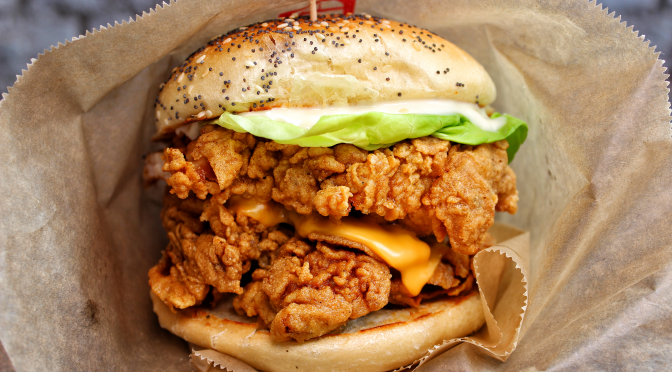 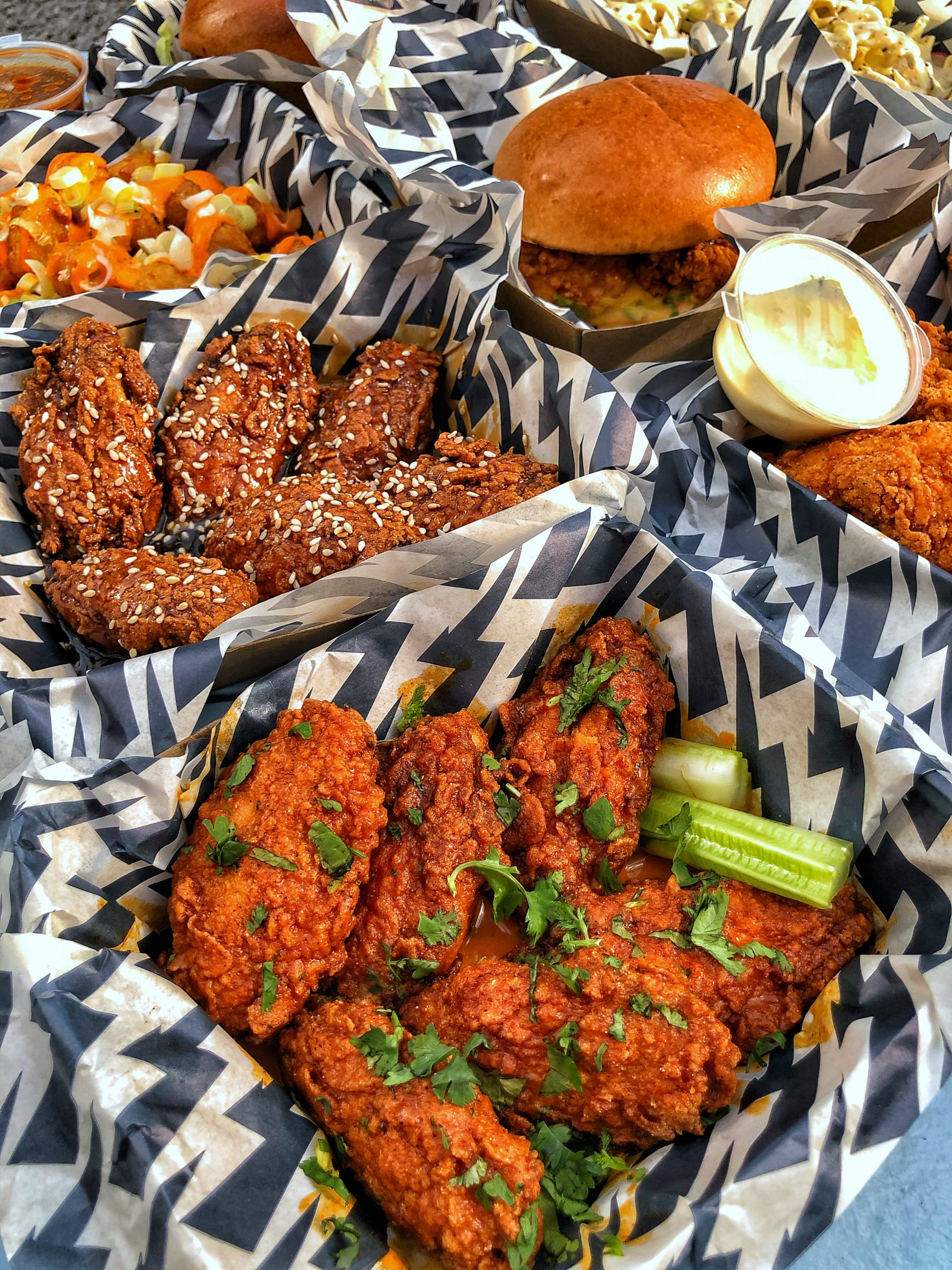 Thunderbird Fried Chicken does some of the best and most unique wings in town! Their best flavour has to be their Chipuffalo- a Chipotle and Buffalo based sauce which you can’t get anywhere else! They also have salted caramel flavoured wings- the flavour is a deep molasses style taste. They said that people either love it or hate it, but I thought they were really good! These guys also do some crispy tenders (which you can also get in burger form). Whatever you order, make sure you try their ‘awesome sauce’ which is a honey mustard style sauce!

My no1 FAVE: Burger UK 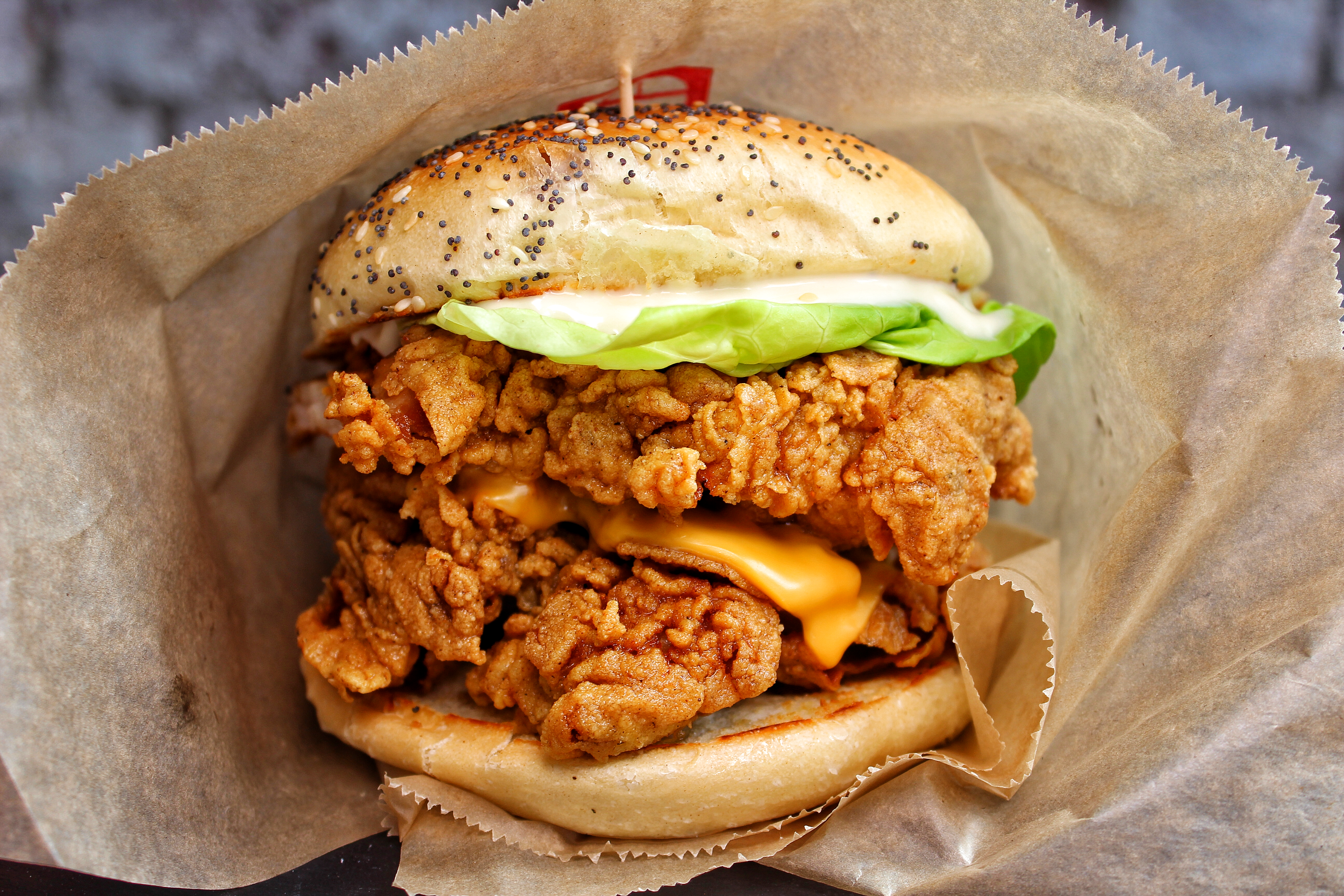 My top restaurant for amazing fried chicken has to be Burger UK. The chicken has flavour all the way through, and has the tastiest coating & crunch! My tastebuds are fully sastisfied everytime not only with the chicken but the amazing combo of everything in their burgers. I love their chef special chicken burger, as well as their plain strips. I also find that ordering a burger each with one side to share is enough for 2 of us- they have generous portions! This for me is the no1 place for halal fried chicken in London. What I also love is that this joint is muslim-owned & ethical in all its practises. Their chicken is free-range, they sell ethical cola from karma kola, donate to water aid via their belu water, use organic ingredients where possible and the restaurant itself is made with mostly up-cycled materials. Halal & Tayyab in all senses of the word! Whats not to love? 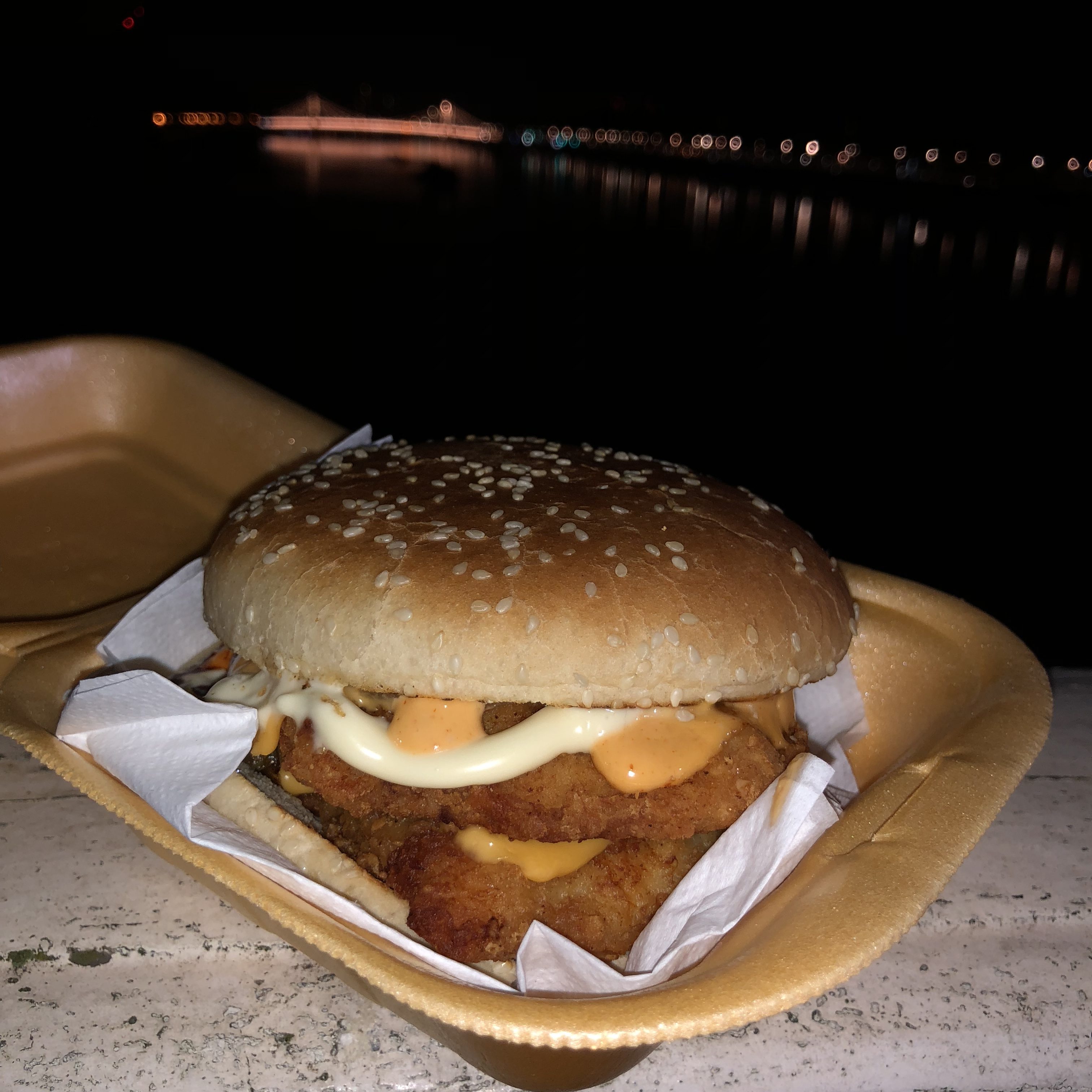 A place you might have seen often on my stories is Chelsea Burger Stand, which is situated obviously on Chelsea bridge. It’s just a stall but it always has super long queues as the food is just hot and delicious. It’s more takeaway style chicken (nothing gourmet) but I am always satisfied with it, and its perfect for late night cravings as its open all night! 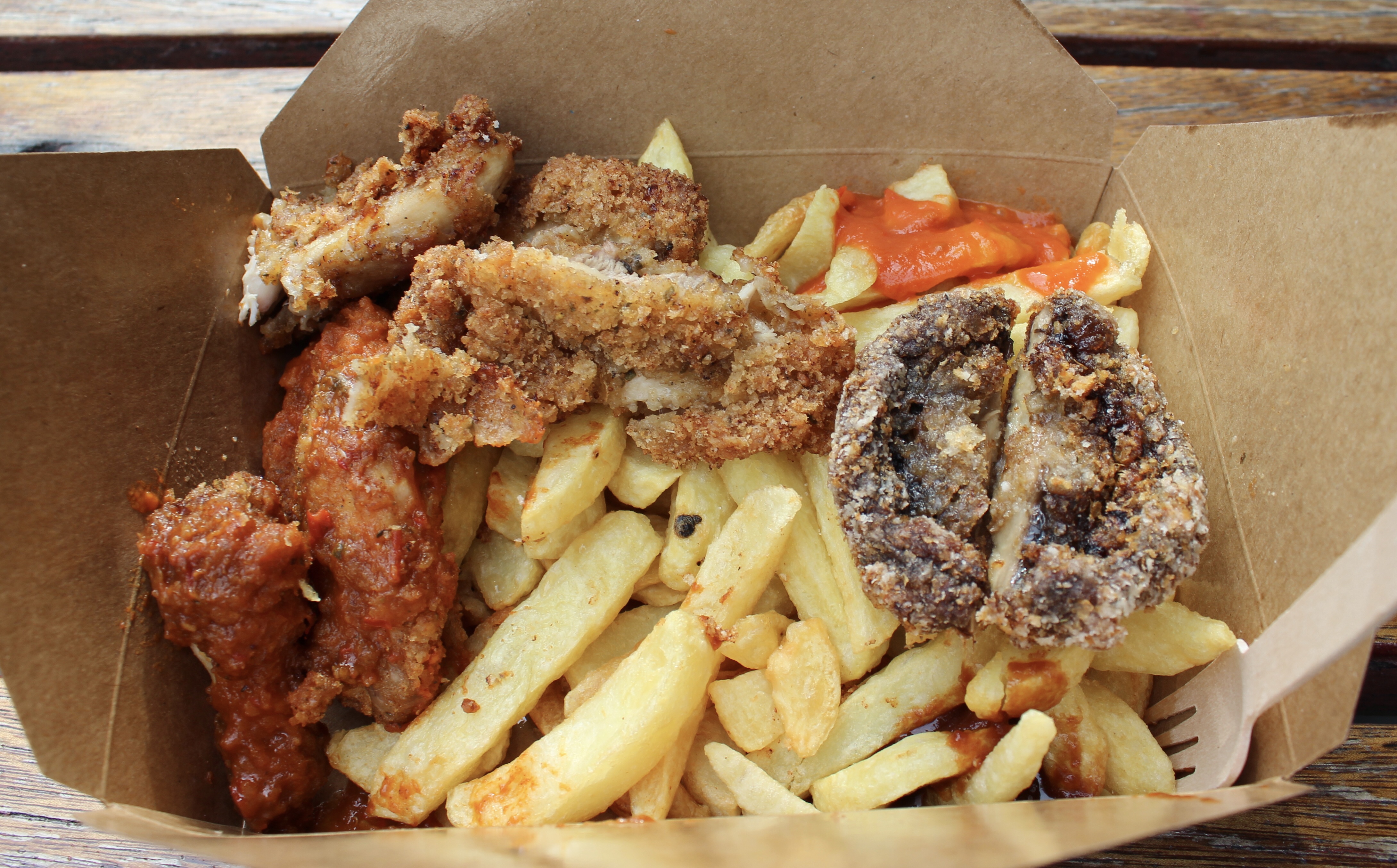 My sister is gluten free so I know the struggles of finding something you want to eat thats gluten free! Uncle G’s is not a permanent restaurant, but it’s actually a food truck that pops up in different locations. I would actually recommend this place even if you’re not gluten free- the chicken has the most amazing crunchy coating, and the meal combos are divine. They serve fried mushroom, fat fish&chip shop chips and saucy wings too. This joint is also owned by the loveliest revert named George. Follow their instagram to find out where they are going to be next, and defo give them a try! 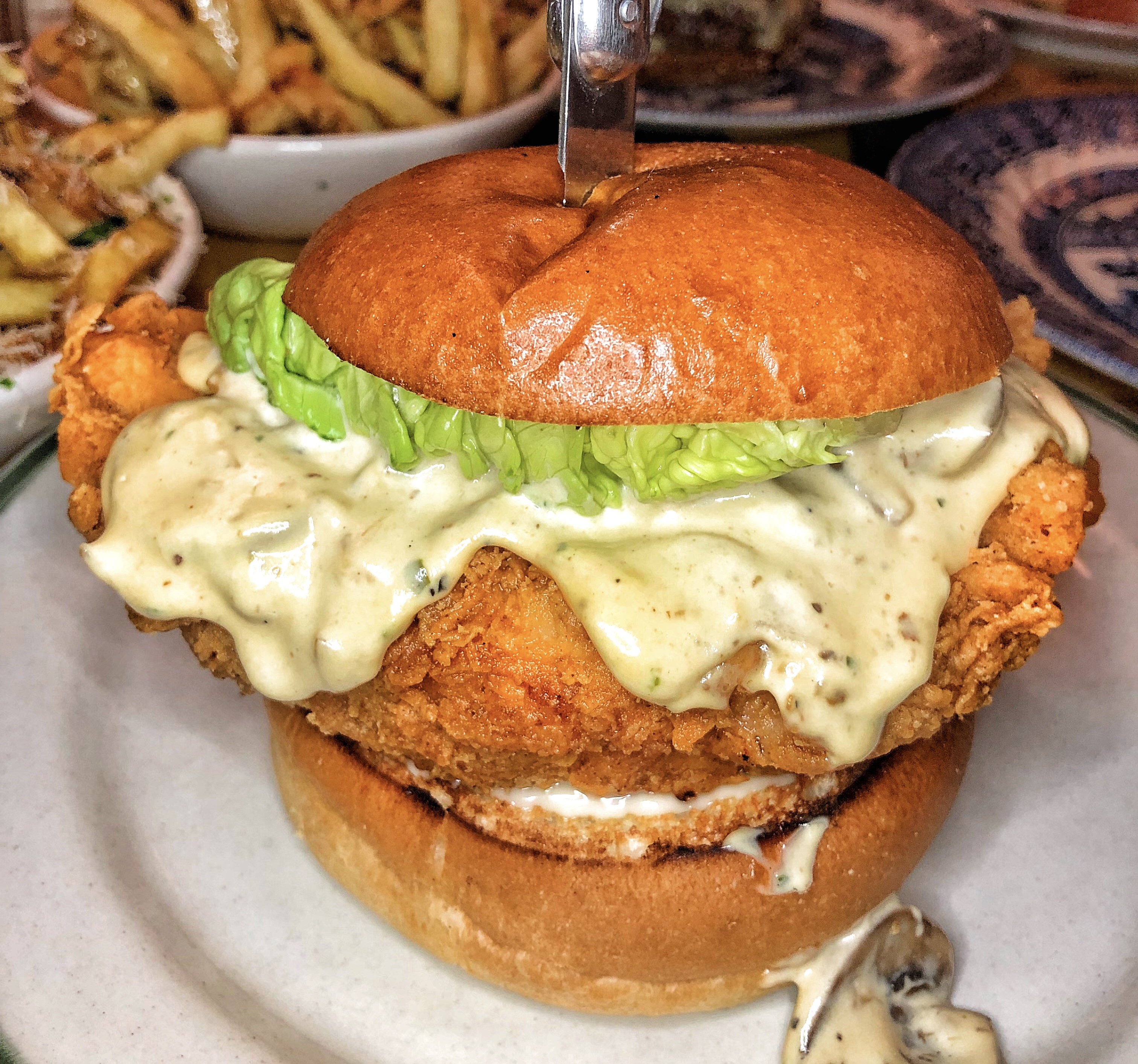 So this place is actually a burger joint and sell mostly beef burgers. However they have one EPIC burger on their menu, which was so good i’ve been craving it since! It’s called the ‘buttermilk fried chicken’ and it consists of a fried chicken breast served with mushroom truffle sauce on top, american cheese & mayo. This burger blew me away! The chicken breast was coated in a crunchy coating which I can only liken to that super crunch coating you get on fried cod from a fish & chip shop. I’ve always loved that kind of coating & thats what you get here! I actually ordered my mushroom truffle sauce on the side as I find truffle to be overpowering sometimes, but that mushroom sauce was sooo creamy & delicious and went perfectly with the fried chicken. Defo give this one a try! This joint is also muslim owned, they have prayer mats available & its super clean with a homely feel & good service.

Location: Leyton, Nearest place to pray: Inside the restaurant 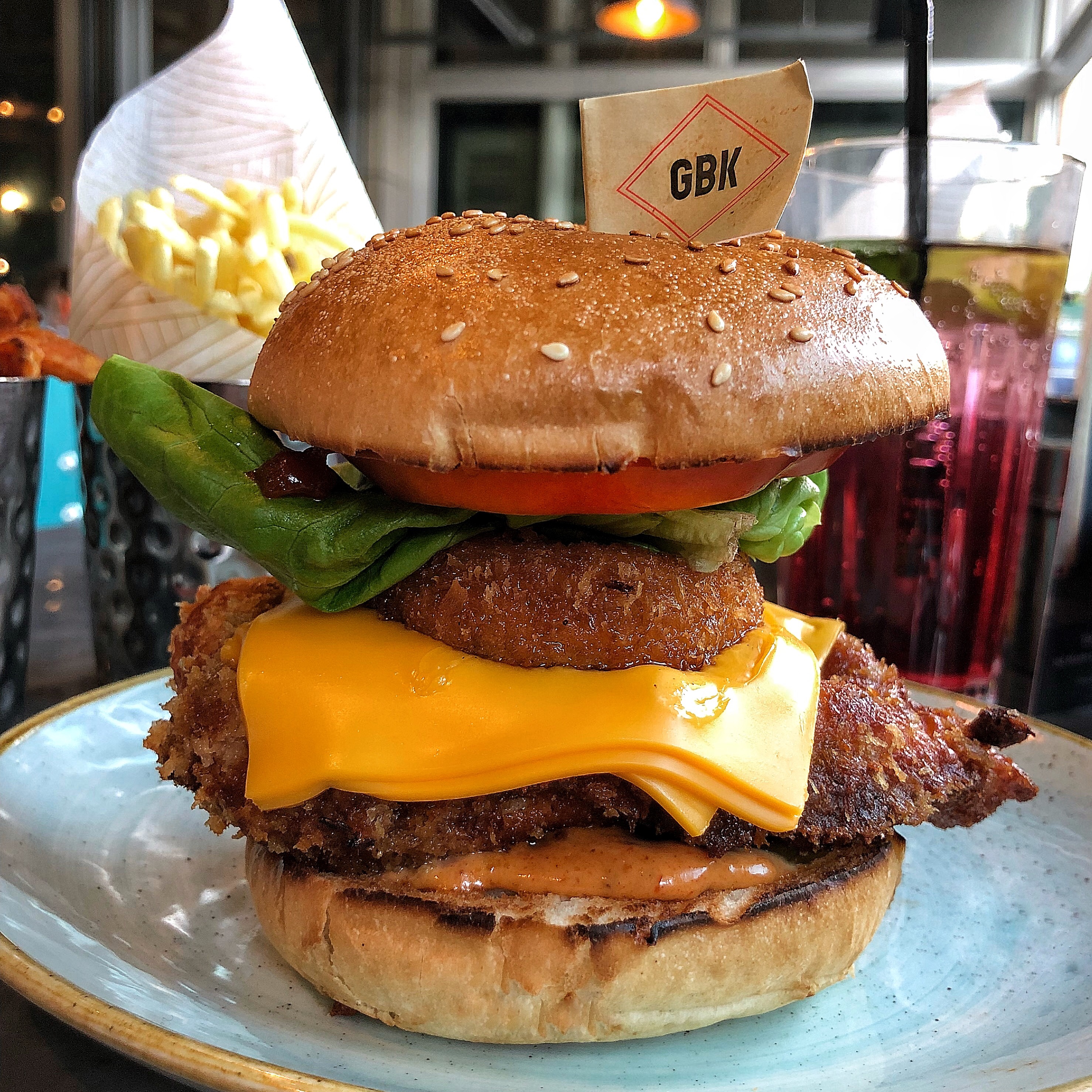 Don’t fight me on this one. GBK fried chicken burgers are actually good! Plus there are so many locations in London that if you’re ever just in the mood for one you can get it. I always get the same one- its called the ‘Taxidriver’  but instead of the non-halal beef I swap in their halal (cooked separately) panko fried chicken. This burger comes in fluffy buns, and on top of the fried chicken you get american cheese, an onion ring, cajun relish, chipotle mayo, dill pickle & salad. Whenever I go I get 25% student discount (through the GBK app) and I find that I can always get a reward through the app also! I get this with their skinny fries. The best part about the burger for me is their sauces. You can pay for some chipotle mayo which is delicious, but their two free sauces are sooo good. They have a hot red sauce & my fave- a green sauce made with kiwifruit & habanero! The green one is amazing. Also defo sprinkle their HEIHEI salt all over your food. You can tell I go here a lot! 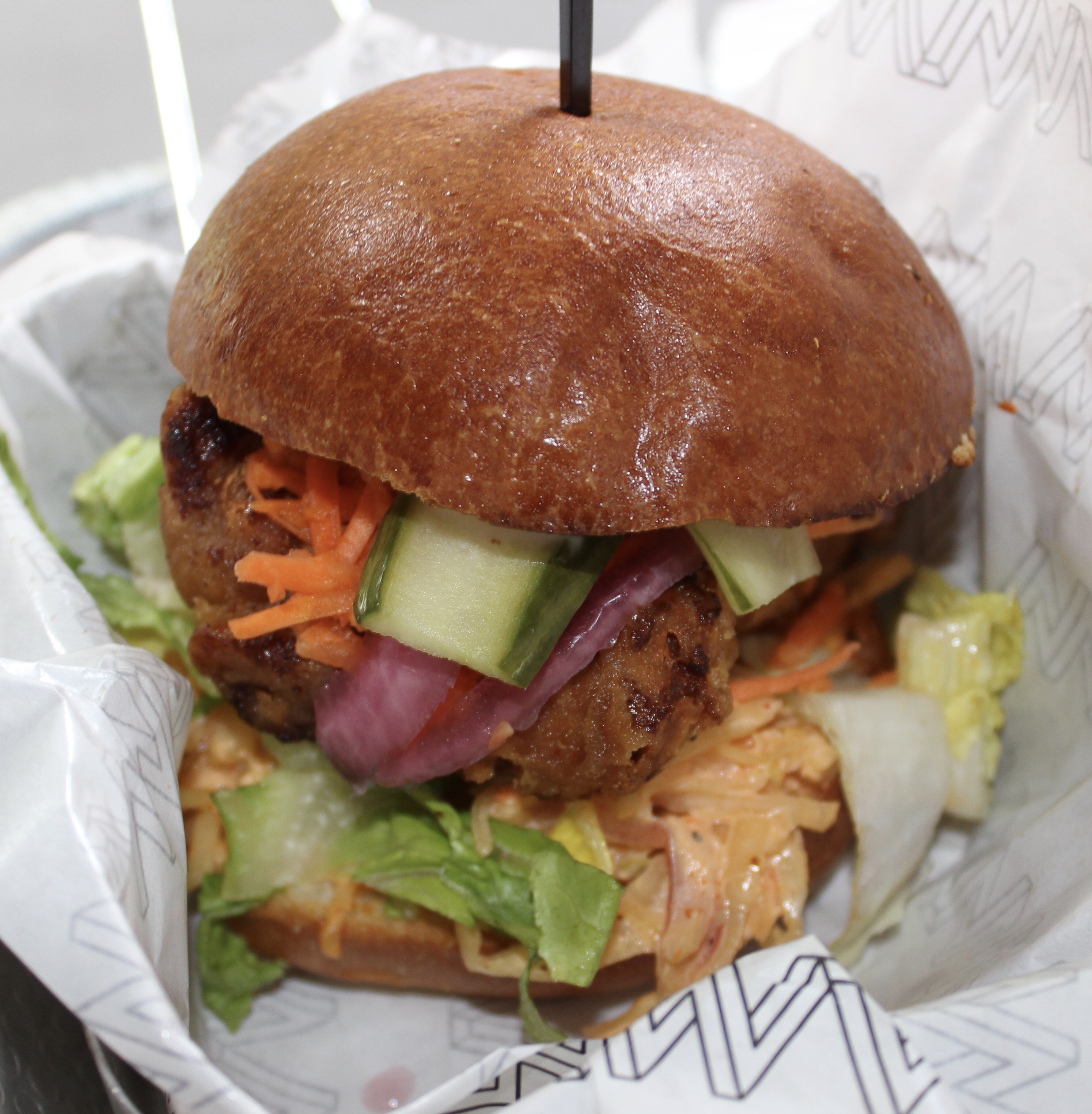 Wing Wing serves pan-asian style fried chicken as either wings or in burgers. I haven’t had this for a while but I do remember loving the burger. It was a different combo of flavours for me (I don’t go for the pan-asian taste usually) but I loved it. If you’re a wings person then this joint is pretty good for you too- their wings were fat!

I remember when Stax came on the scene, and we all finally had a halal burger place to go to in central London! Overall I am kind of neutral about this joint. Sometimes it hits the spot but other times I am underwhelmed. Stax was the first place I tried chicken&waffles, and I do still love that meal. The chicken itself is defo on the plain side, but the combo with some sweet maple syrup really does the job. My fave burger is the buffalo one- their buffalo sauce is delicious!

The one you have to tick off your list: Shake Shack 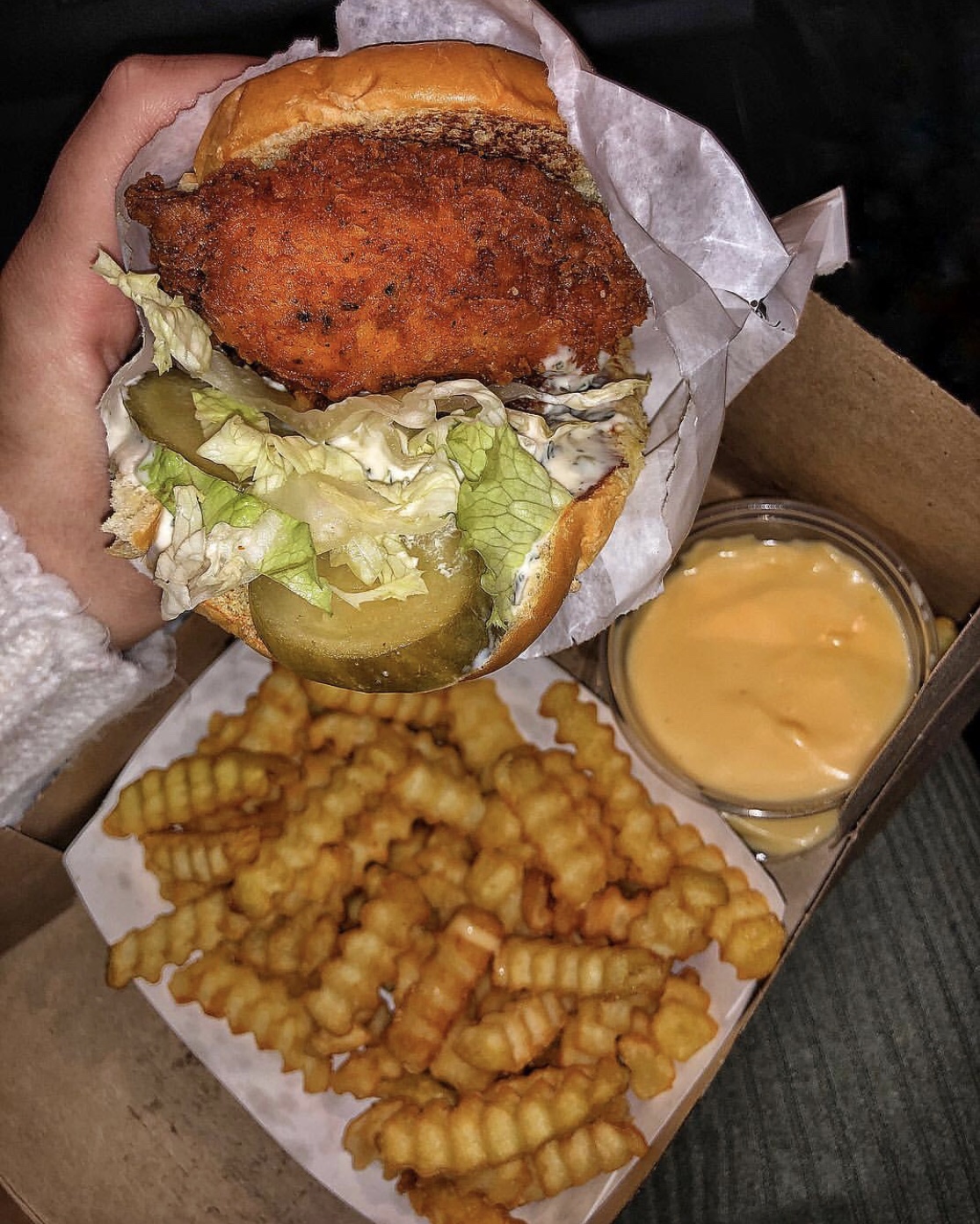 Everyone talks about Shake Shack, but we don’t have to be jealous anymore as the chicken in their UK stores is halal! Actually you don’t really need to be jealous in general as its not alllll that. But their crinkle fries and chicken burger go so well with their liquid cheese sauce! Actually the cheese sauce makes the whole meal. 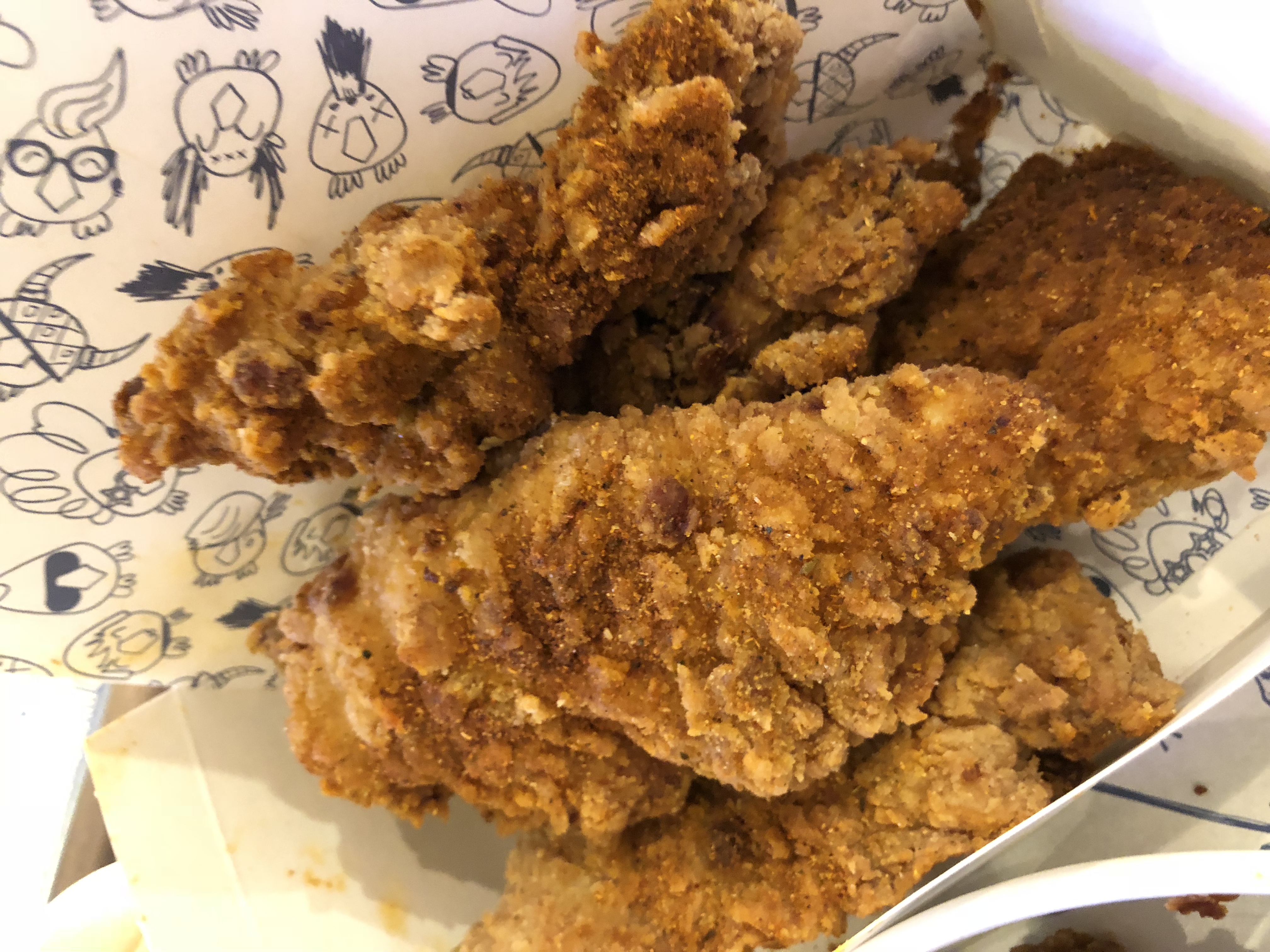 This is a relatively new joint in Baker Street. Their chicken was super crunchy, and we also love their wings. Their burgers were more average. I haven’t actually been here since- it’s not something I would crave. UPDATE: They have opened a new branch in Soho & after trying it again I did really enjoy it. The spicy strips are still my fave & I would get this over their burgers!

The one that’s really instagrammable: Other Side Fried 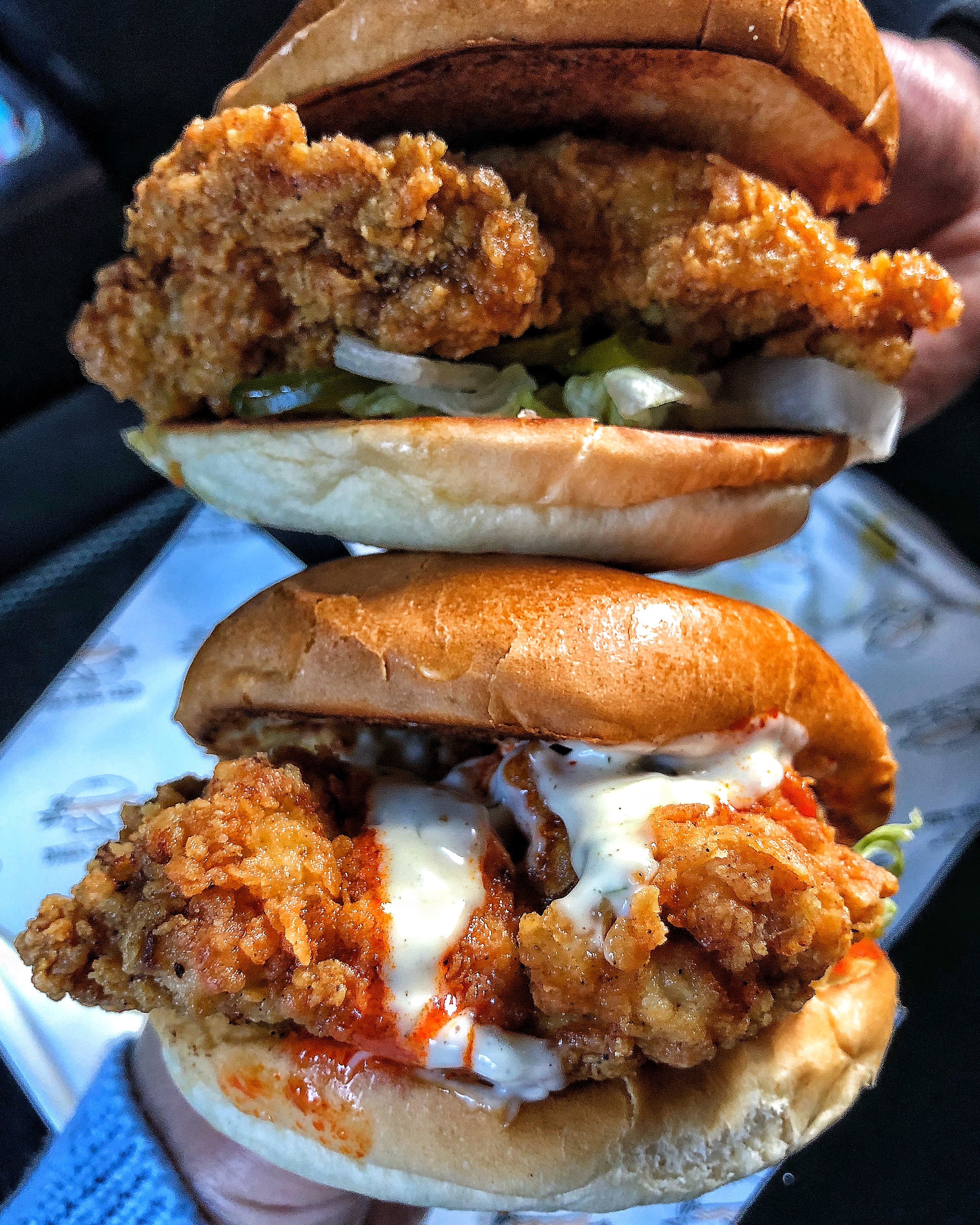 So this one looks good, and as you can see from their insta feed, their burgers are really photogenic. However, I genuinely think you don’t get a good bang for your buck here. I actually was dissapointed at the size & fillings of the burgers the last time I went! I tried the honey butter (which I obvi had to get without bacon) and it was pretty much just chicken in a bun. Their buffalo one was very tasty and its the only one I would get again. I wouldn’t really crave this burger or seek it out to go again, but if I was ever near one I guess I wouldn’t mind eating it. 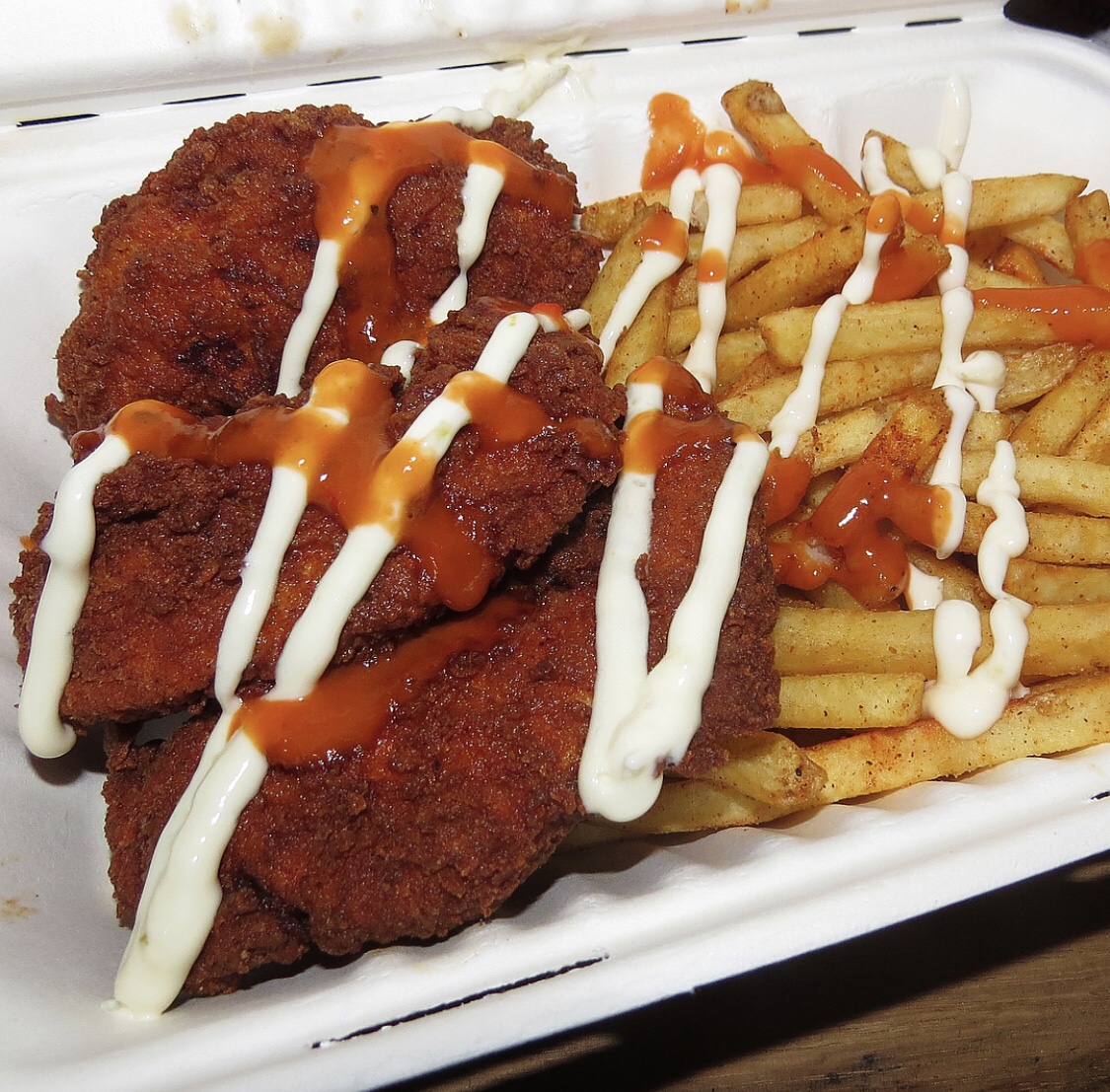 We’ve only tried this once, so defo need to go again to review it, but we really enjoyed their ‘Tea brined, buttermilk soaked, twice battered fried chicken’ although the portion was small for the price. People do overall love this place so I shall defo try and go again to get a more accurate review. 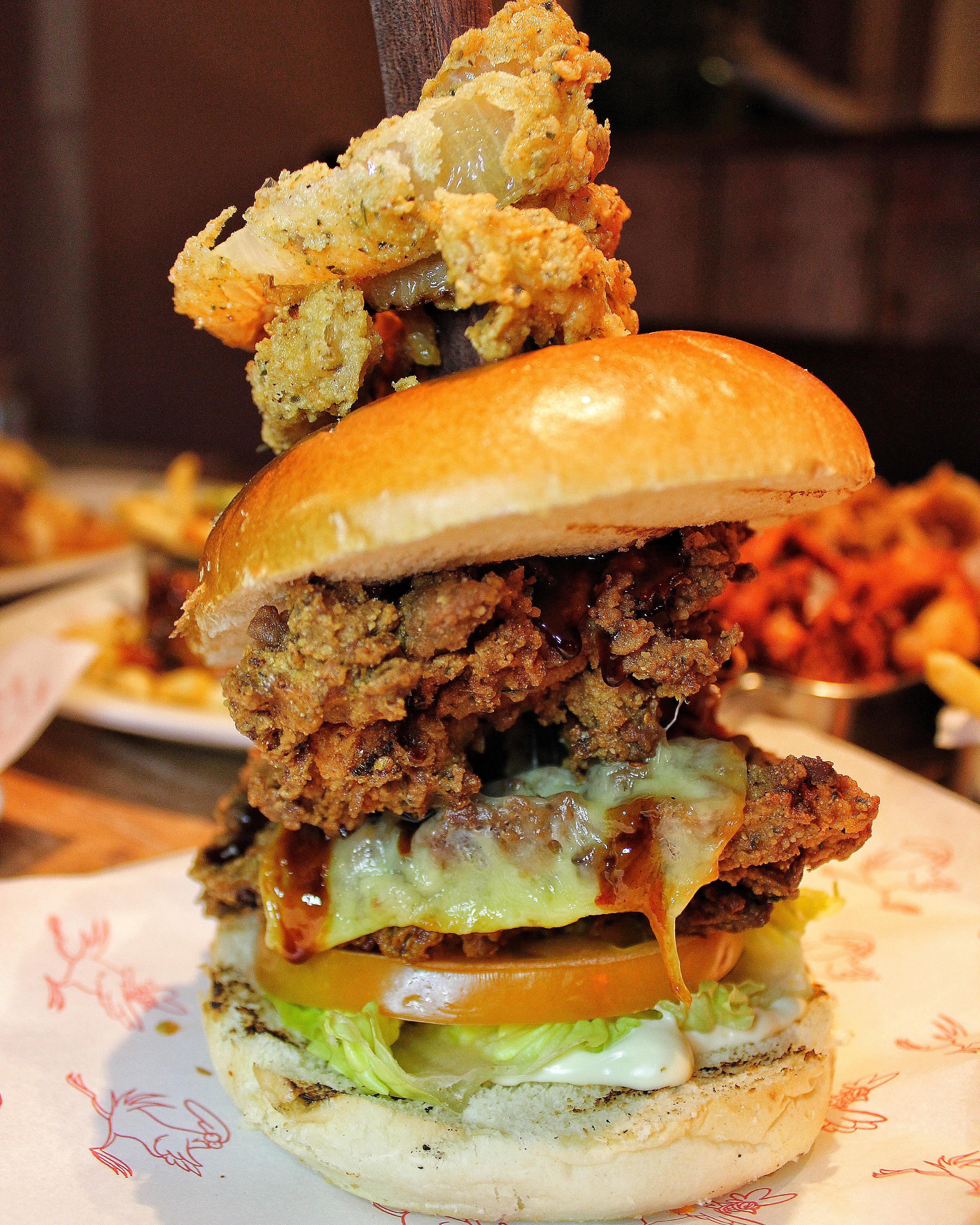 I call this one the novelty as they do really cool burger creations (like a huge burger tower with onion rings). Their chicken is all halal, but they do serve bacon & alcohol on the premises. This is the kind of place where the flavour of the chicken wasn’t amazing enough for me to remember, but I just know the overall combos of the burgers & sides was tasty. 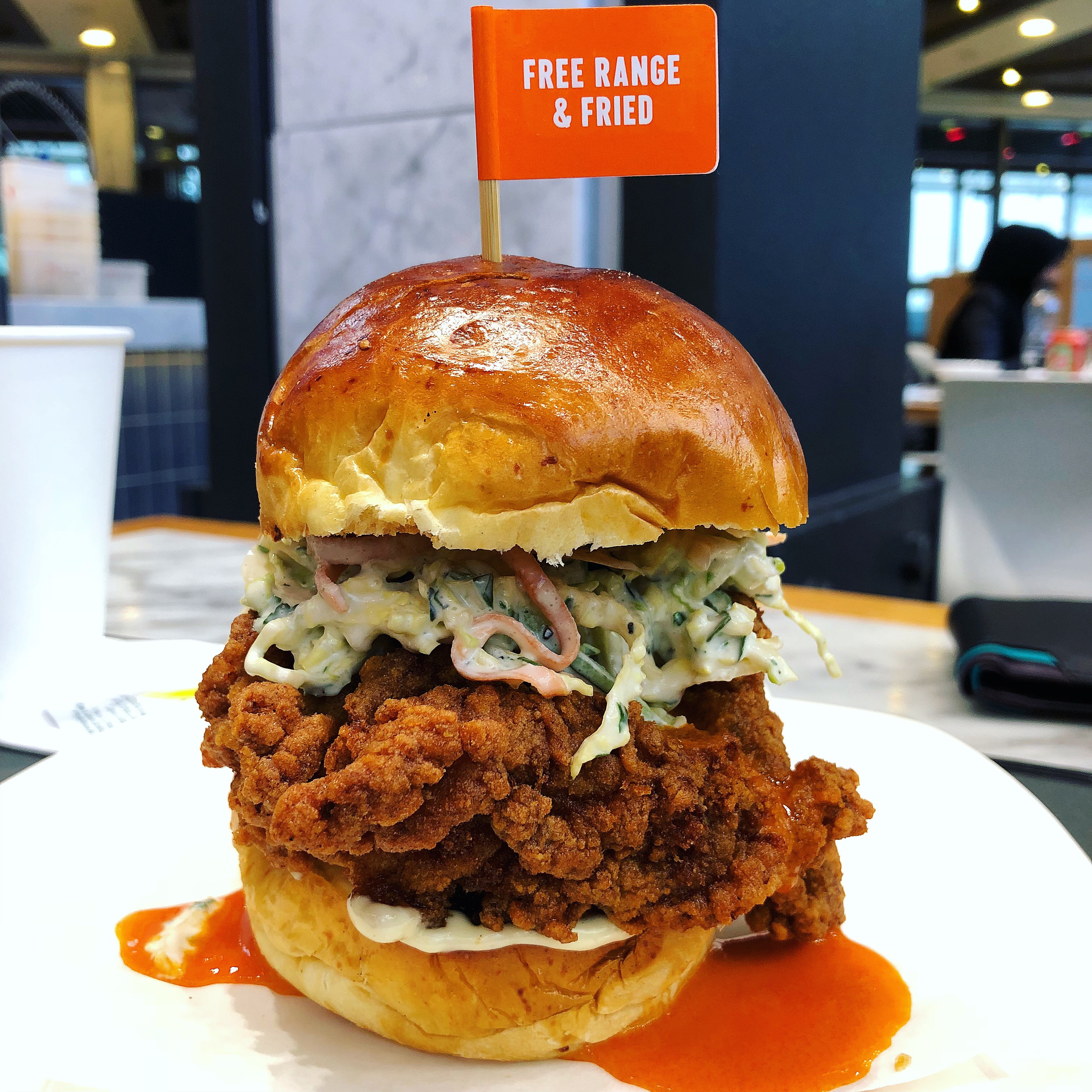 I remember this being one of the first free-range & halal joints. Their standard remains the same, and it’s a good shout if you’re near one of their restaurants. Their buffalo chicken is especially good! 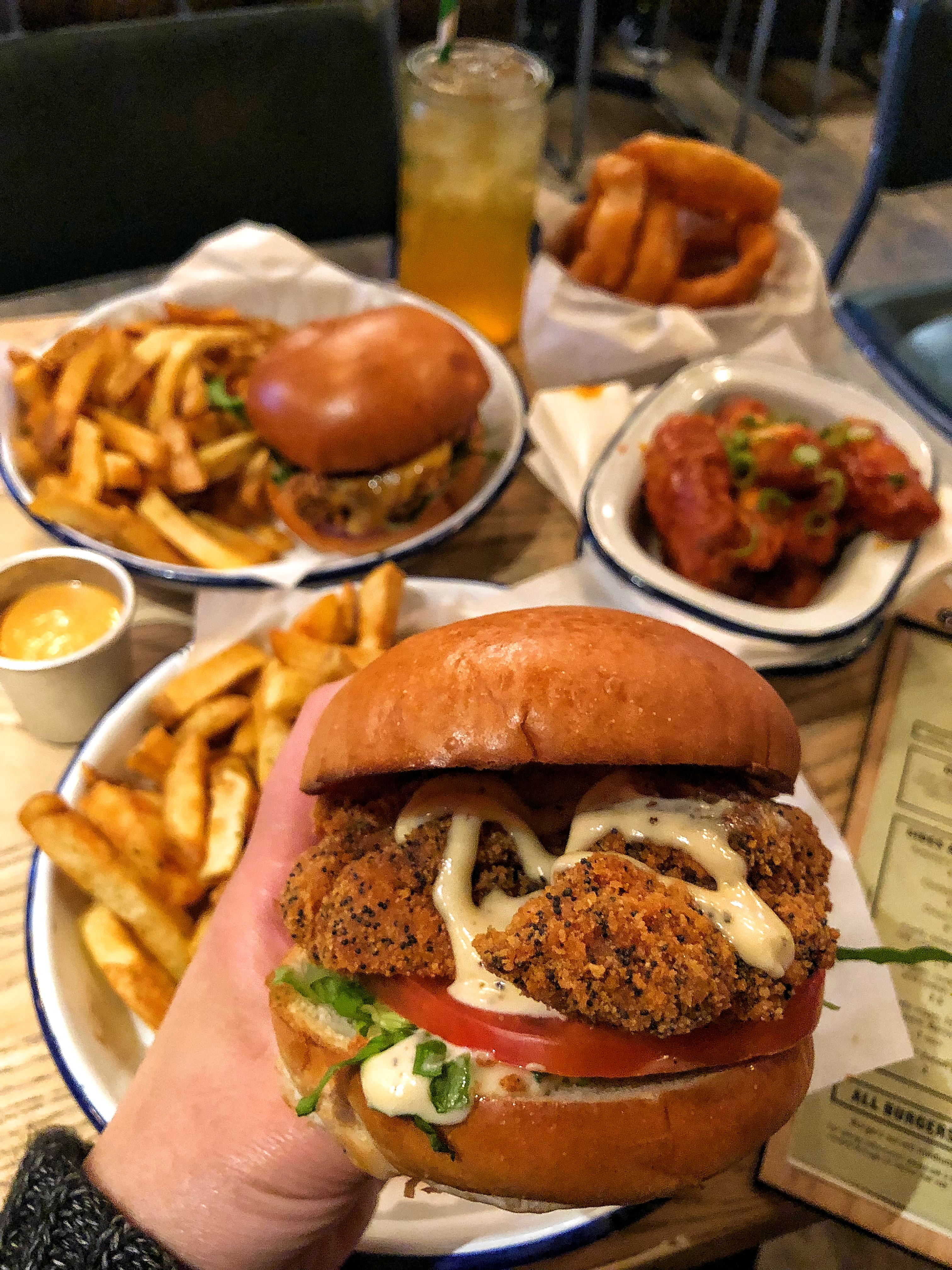 Only two of their branches serve halal chicken (Baker Street & Tooting). The best burger was the chilli as it had chilli cheese & jalapeno relish – the chicken isn’t too flavourful so you need these extra sauces. Their wings are delicious and fat too. I also found their prices reasonable as they included chips! Read our full review of Honest Burgers here.

Made this spicy ramen dish🍜 & used the best chi

Cheesy Loaded Nachos😍 from @tortillauk who have

Crispy fried fish 😍 from @inkfishbar which is s